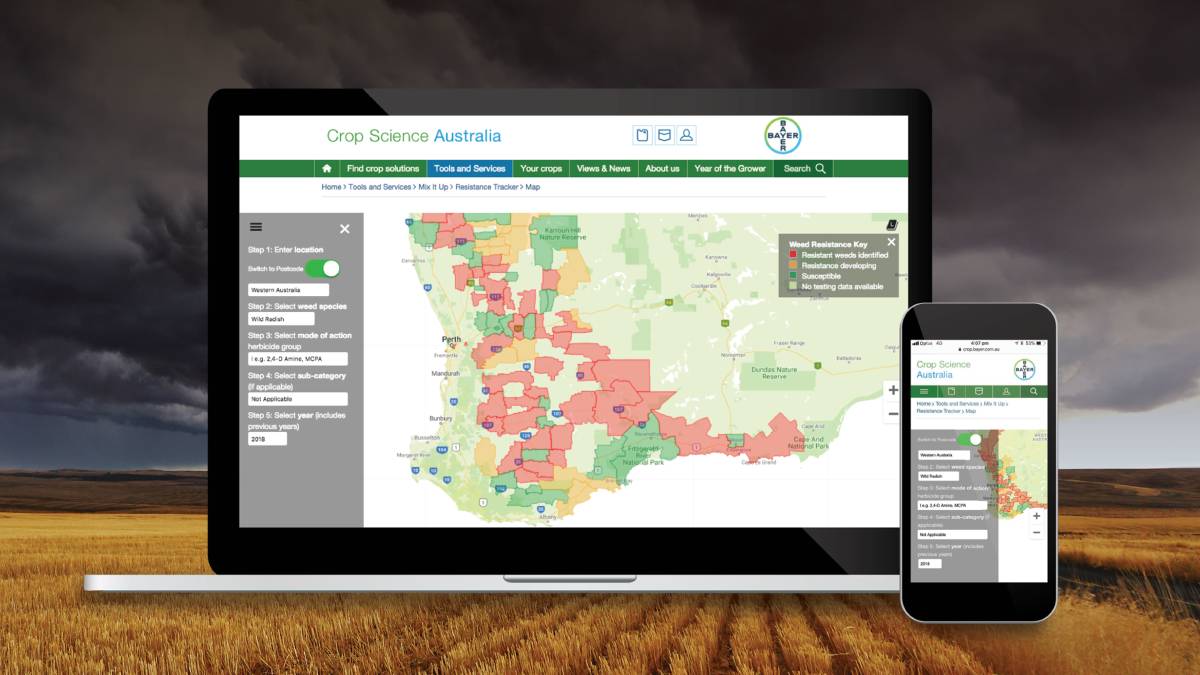 MIX IT UP: Bayer has launched a new online resource to help tackle the costly issue of herbicide resistance.

Bayer has launched a new online resource to help tackle the costly issue of herbicide resistance.

A NEW online resource called Mix It Up is set to help the Australian grains industry has a new tool to tackle the costly issue of herbicide resistance.

The Mix It Up website produced by Bayer is a central resource for growers and advisors containing a wide range of information on understanding herbicide groups and Integrated Weed Management. The website also provides collated herbicide resistance data, allowing growers to enter their details and access localised data.

The Mix It Up site is set to play a crucial role in management of weeds, considered the greatest challenge that Australian broadacre grain growers face with annual costs of $146/ha, or $3.3 billion.

Craig White, leader of Integrated Weed Management for Bayer in Australia, said Mix It Up provided growers and advisors a place to not only find herbicide management solutions, but links to a wide range of information to manage weeds.

“It’s an issue that is continuing to grow, but it can be managed because there's a lot of great information. We’ve placed lot of effort in this,” Mr White said.

“Through Mix It Up, Bayer is aiming to give growers and advisors a good central resource to start their journey on how they might go about managing and growing the best crops they can with the least weed competition possible.”

Mix It Up is available freely online for anyone to use, and contains a wide range of useful tools, including the new resistance tracker, which maps all the herbicide resistance test data from the commercial testing services in Australia. 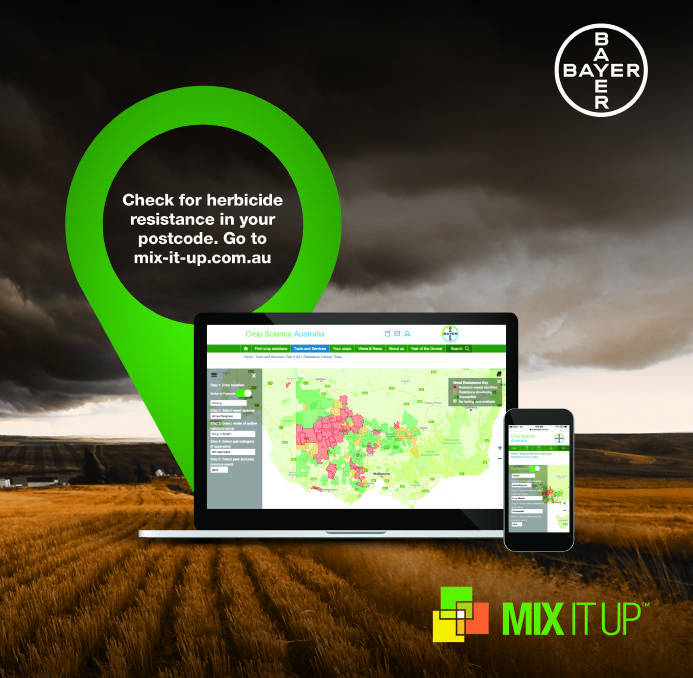 Users can put in local information and search terms to look at weeds and different herbicides to track how resistance has perhaps evolved over the years in their local area.

The resistance tracker could also be used by advisors to help them identify districts that may need some herbicide resistance testing on particular weeds and different herbicide groups or modes of action.

“For example, a grower in Merredin, in the Western Australian wheatbelt, could enter the local postcode of 6415 into the resistance tracker, then select the status of wild radish to the phenoxy herbicides; 2,4-D, MCPA,” Mr White said.

“The search results will come up with a coloured map showing if the weed is susceptible in that area, is resistance developing, or are the weeds likely to be resistant to this chemistry in this area. The grower could also see how many tests have been carried out in that postcode and the status of the tests.

The herbicide resistance tracker will display data from the 1990’s right through to 2017-18, so it really empowers growers to identify and act on emerging resistance issues. - Craig White, Bayer

“The herbicide resistance tracker will display data from the 1990’s right through to 2017-18, so it really empowers growers to identify and act on emerging resistance issues.”

For Dr Peter Boutsalis, the need for a resource like the Mix It Up website has been clear for some time.

“I get a lot of questions from farmers, they keep on calling me and asking what is the herbicide resistance level in their region, which means I have to go and analyse my data,” Dr Boutsalis said.

"However, this resource is already available online, so they can go to the website and look at what town they are in, what weed species they are interested in and then find exactly what the levels of herbicide resistance are in their area.

“It is an amazing website to be able to capture all the information from different sources throughout Australia into one very easy to navigate-through site.”

Along with the resistance tracker, the Mix It Up site also includes information on understanding herbicide groups, IWM basics, and links to a range of general industry resources, including WeedSmart, the Australian Herbicide Resistance Initiative, the GRDC IWM Hub and CropLife.

“Creating this sort of resource for industry is so critical because at Bayer we have a lot of technical expertise to help grow food for the long term, but there are huge challenges that are well documented about an increasing population and challenges from weeds,” Mr White says.

“The bigger picture is that we all need to eat, and Bayer supports a long-term and sustainable ability to grow crops and feed an increasing population, and Mix It Up will play a useful role in achieving this.”

RELATED STORY: ‘Grain markets: All dressed up with nowhere to go…’