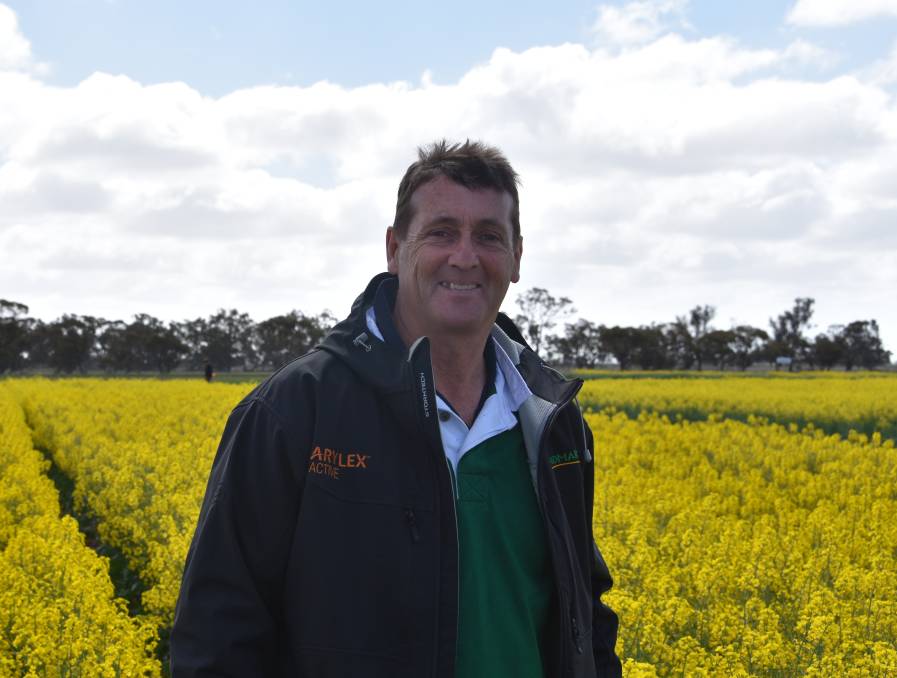 Greg Toomey, Landmark Elmore, says farmers need to strike while the iron is hot if they want to make quality canola hay.

It has never quite shaken off the 'bundle of sticks' label, but experts say well made canola hay is an excellent source of feed.

IT HAS good energy levels, of up to 11 megajoules per kilogram of dry matter (mj/kg/dm), better than cereal crops cut specifically for hay, and protein levels of up to 21pc, but canola hay has never entirely shaken off its bad reputation.

Landmark Elmore agronomist Greg Toomey said the negative connotations from the 2008 season when significant volumes of canola crops were cut for hay almost at the stage of windrowing, had stuck.

“What we saw were dairy farmers buying what was essentially a bundle of sticks and that is why there is some market reluctance about buying canola hay.”

“The key is to cutting it at the right time, when there is still leaf matter there and around six to eight centimetres of flowers,” Mr Toomey said.

With this in mind he said many northern Victorian and southern NSW farmers would have to move quickly to make good quality hay.

“Many crops are at the optimum stage for hay production right now, so people will have to make decisions fast.”

Daryl Poole, of agricultural consultancy RMCG, said dairy farmers would be willing to buy canola hay providing the feed tests had been done.

“They will be happy to buy it so long as they can see it is a quality product.”

However, price estimates for canola hay are varying wildly.

Prairie farmer Russell Hocking, who is going to cut canola for hay for the first time said he was hopeful it would end up being priced in a similar bracket to other high protein hays such as clover and vetch.

“We really don’t know what will happen, but somewhere around $350 a tonne would be good.”

Mr Poole, however, said dairy farmers were looking for a markedly lower price.

“The market will ultimately decide what the price is,” he said.

Mr Toomey said he would be surprised if well-made canola hay did not sell well.

“It is just going to be a matter of being diligent in making a good product and ensuring you’ve got the feed tests to show prospective buyers they are getting something worthwhile.”

The risk of nitrate poisoning has been raised as a potential problem, but Mr Toomey said so long as normal practices regarding introducing livestock to a new feed source it would not be a problem.

“If it was all they were getting in a ration straight off then it could be a problem, but in a mix it is very low risk.”

He said many dairy farmers, which require a high protein feed source in their ration, were eyeing off canola hay as a possible alternative, given the expected dearth of normal legume hays which normally provide the protein component.

“You can see a lot of crops around with between 2.4 and 2.7 tonnes to the hectare of dry matter and grain yield estimates of just under a tonne to the hectare, which is not guaranteed.

“In years like this you also have low oil content so even though the headline price for seed is $580/t it could come back to something like $530/t.

“Even allowing for having to get balers in, the sums add up in favour of making hay.”

Mr Hocking said in his case he expected about 2t/ha of dry matter with the potential of 0.75t/ha of grain, with further risk.

“It could easily go  as low as 500 kilos to the hectare of grain so we’re looking at hay.”

“To stop it getting stalky, it is good to cut up the stalks well with the conditioner and it also cuts down on the curing time.”