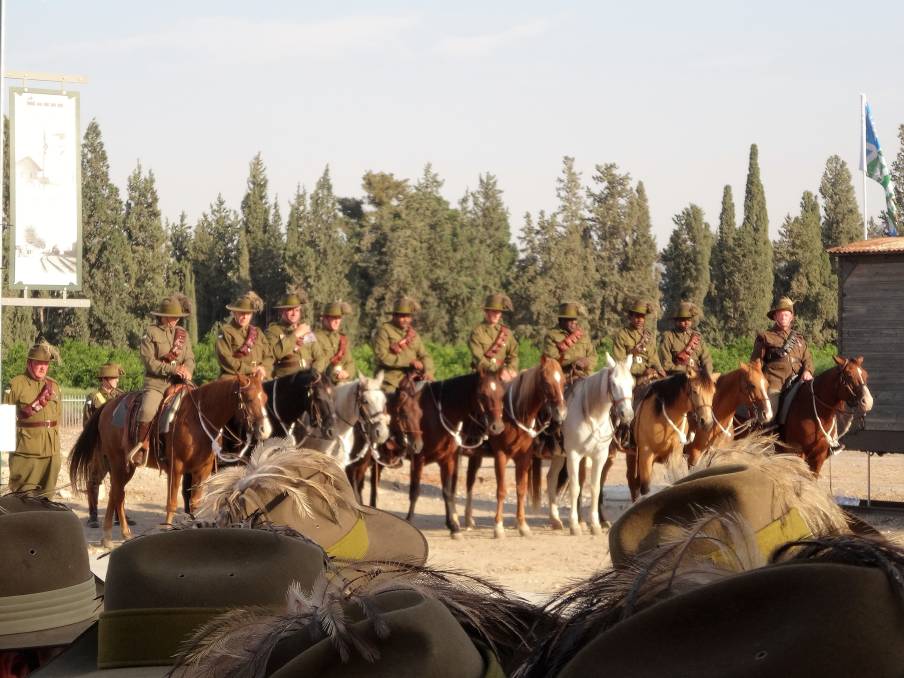 Ride for pride: Indigenous representatives from Central Australia were part of the mounted party taking part in the ceremony. Pictures: Sally Cripps.

The Australian Light Horse Association recently joined the Department of Veterans Affairs in honouring the role of indigenous soldiers in the first World War in Palestine.

As well as commemorating a brave pre-dawn cavalry charge that superseded the better-known one at Beersheba almost a year earlier, the Australian Light Horse Association recently joined the Department of Veterans Affairs in honouring the role of indigenous soldiers in the first World War in Palestine.

In the dark before dawn on September 25, 1918, the 11th and 12th Light Horse regiments charged across unseen ground to fight for the geopolitically significant railway site at Semakh, a link for the Turks between the coastal city of Haifa and Damascus.

DVA representative, Major General Dave Chalmers, speaking at a ceremony at the restored Turkish railway station on the Sea of Galilee, said the 11th Light Horse was known as Queensland’s Black Watch in honour of the fact that more than any other regiment, it contained a large proportion of indigenous troopers.

“In fact, one whole draft of reinforcements was completely indigenous during late 1917,” he said.

“There has been quite an interest in recent years in researching, recording and acknowledging the role these men played.

“It’s especially significant, knowing a number of indigenous representatives here are descendants of those who fought here.

“Indigenous soldiers fought in almost every branch of the AIF – they were among the wounded, among those named in bravery awards, among those who lost their lives.

“At least 100 served in the Light Horse. Today they are receiving the recognition that has long been their due.”

Along with the Jewish National Fund, the Rona Tranby Trust, and Mistake Creek Station, the Department provided a funding grant that enabled a number of the indigenous riders to take part in the tour, and the Semakh commemoration.

Tour organiser Barry Rodgers said a significant number of Aboriginal troopers had served in the Semakh action, with great distinction.

“It took us some time to realise how good horsemen they were,” he said. “They are naturally athletic, quick and intelligent. That makes them good soldiers too.”

Mr Rodgers also commented on the young students in the Central Australia region who have been catching wild horses, breaking them in and training them, then riding 140km to Alice Springs to be part of the Anzac Day parade to recognise the service of their forebears. 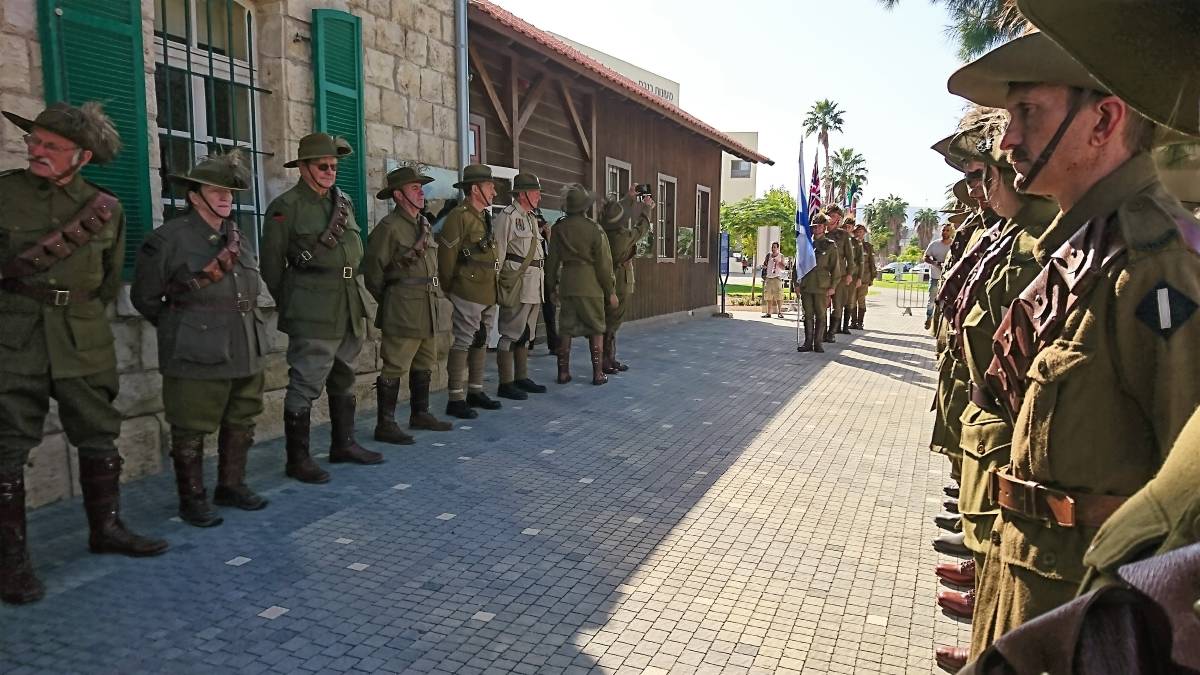 Australia’s ambassador to Israel, Chris Cannan, acknowledged the immense contribution made by indigenous Australians during World War One, especially in the Light Horse, where their horsemanship skills were so highly prized.

“I’ve quickly come to appreciate the military role that Australia has played in this part of the world.

“I think the contribution then and also now is one of the many reasons I’m sure you’ll find Australia is highly valued as a friend and partner in this part of the world.”

“There would have been railway carriages all over, and an outpost 500 or 600m out.

“The 11th Light Horse brigade was advancing from the south east through the trees.

“They came across sentries and came under fire, fortunately over their heads. 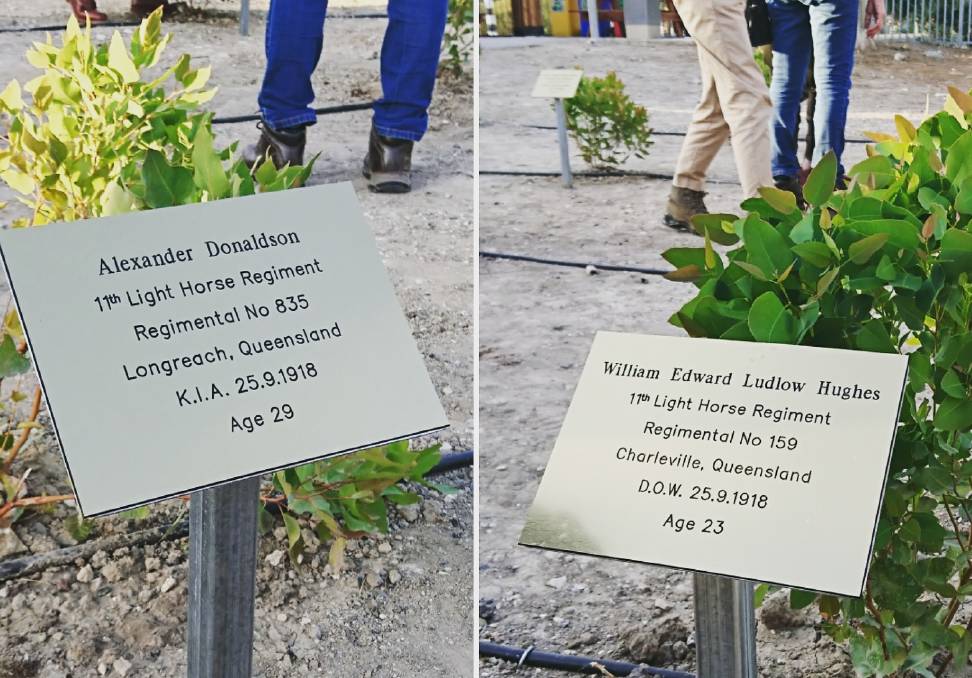 Troopers from Longreach and Charleville were among those remembered with the planting of eucalypts.

“B squadron led by Major Costello, immediately came under fire, and gave the order to form a troop line.

“He then gave the order to draw sabres, because the Light Horse had recently been issued with them.

“Both A and B squadrons went into the attack towards the guns.

“As they came within about 500m of the station, they had to break up because they were taking heavy fire and taking casualties, not just from enemy bullets but also from the potholes the horses were falling in.”

Mr Childs said the whole battle was over in a little over an hour and five minutes.

“There were many acts of bravery during that short period. We lost 19 Light Horsemen killed.”