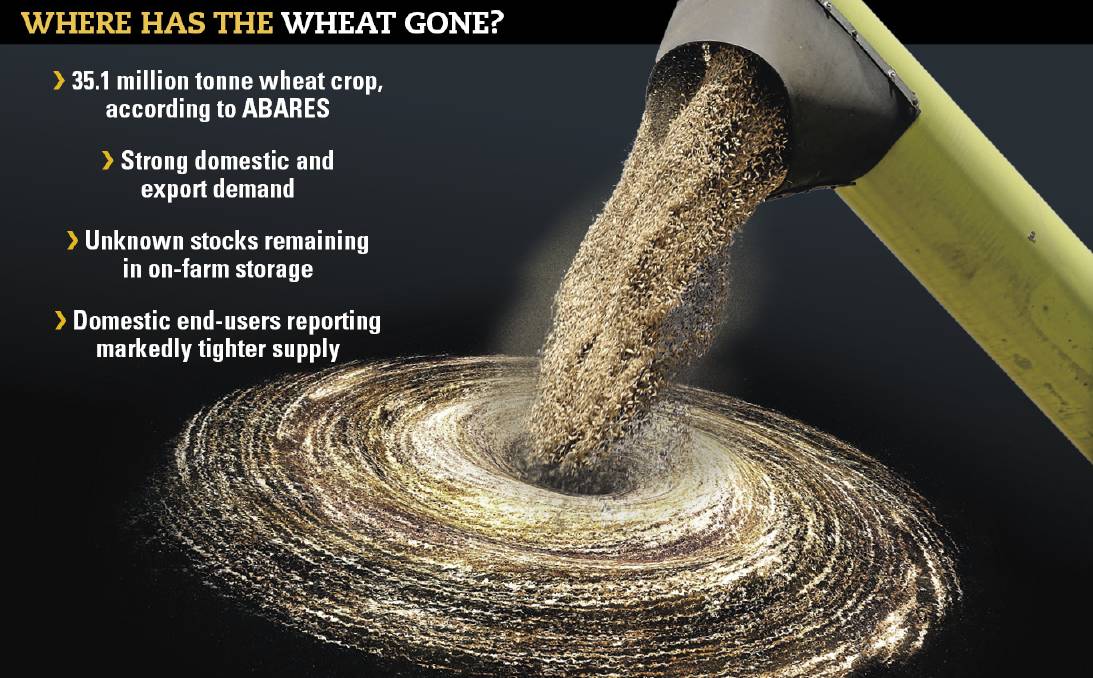 Grain users face the prospect of price rises continuing at least until new crop supplies come on board in October / November.

THE LIGHTNING pace of the run down in grain stocks in Australia in spite of last year’s record breaking winter crop has caught a number of domestic end-users on the hop.

There has been a whopping $100 a tonne rally in wheat prices delivered to Darling Downs feedlots over the past three months, marking a major transition from prices in the lowest 10 per cent on record over harvest.

Wheat for immediate delivery is now trading at around $330/t delivered Darling Downs and barley around $320/t.

This demand is providing support for old crop grain right down into southern NSW.

The prices currently on offer are in stark contrast to prices being paid to growers in southern Australia for feed one barley of around $100/t at harvest.

The good returns in cattle, combined with the cheap grain, saw cattle on feed levels in Queensland rise to record levels.

However, now grain supplies have suddenly dried up, with the ensuing rise in grain prices, combined with a decline in cattle values biting hard into feeder margins.

There are a range of factors causing the shortage of grain according to ProFarmer chief analyst Hannah Janson.

Ms Janson said improved port logistics at many facilities allowed exporters to chew through grain at a markedly faster pace than previously.

“We are seeing the investments in port facilities over the past five or six years really paying off at present.”

“This is the first season where we have had the tonnage to push through improved port facilities and the export pace has caught domestic customers off guard, the rate of exports was really quick.”

Along with that, Ms Janson said grain farmers were currently unwilling sellers given the big season last year and the uncertainty surrounding the current crop.

“There is no financial requisite to sell given they have satisfied cash flow needs already and with the market rising due to the worries about the new crop we don’t think you’ll see much grain selling without a price rise.”

She said the spike in prices in early July, combined with the new financial year had sparked some grower selling but that had dried up now.

“People are holding onto grain as a drought hedge and it has meant domestic buyers are struggling to get their hands on supplies,” she said.

“While the season remains dry and there is an upward trend in pricing, growers have shut door on selling.”

However Ms Janson said many grain users had taken the opportunities presented at harvest.

“A lot saw the low prices on offer and locked in all their needs for the year.”

Another factor Ms Janson nominated as a cause for the grain shortage was a slightly smaller crop than some agencies had flagged.

“It is only 5.9 per cent difference in percentage terms, but when you talk about carryover stocks of say 10mt, that difference becomes 20pc and it’s a big deal.”

Mr Bartholomaeus, said claims the crop may have been smaller than first thought could have merit.

“The thought has crossed my mind,” he said.

However, he said without more detailed stocks reporting it was difficult to assess how much grain was around.

Nick Crundall, pool manager with Market Check said he also felt the national crop was not as large as it had been reported.

He also said the lack of feed grain production in the summer cropping period had been supportive of pricing.

“The sorghum crop was terrible and it has meant we have seen end users just chewing through available feed grain such as barley, which is now coming in from a long way south.”

There may also be a substantial volume of grain not making it past the farmgate.

Ms Janson said mixed farmers were keeping their grain to feed to their livestock.

“With livestock prices really solid, people may have kept more grain on-farm and used it to value-add their livestock, especially given the low grain prices at harvest.

“This grain never hits the system so you don’t know how much this has happened.”

Ms Janson said she thought most unpriced grain would now be in on-farm storage.

“There is still some grain in the system but the buyers would likely own most of it.”

In terms of crop types, she said particular shortages were being found in the barley complex.

Andrew Whitelaw, Mecado, said his organisation was closely watching local production prospects over the next couple of months.

“That will not only influence new crop prospects but the price of the remainder of the old crop.”

“Users are generally hand to mouth buyers at present and the carryover is very hard to estimate.”

Grain Producers Australia chairman Andrew Weidemann said the trend in recent years had been for more grain to be stored on-farm.

“Definitely the majority of grain that hasn’t been sold will be in on-farm storage.

However, he said he felt stocks of unpriced grain were now relatively tight.

While he said there was still some unpriced grain stored on-farm he said many growers had already committed their stocks and were simply storing it until the end-user wanted delivery.