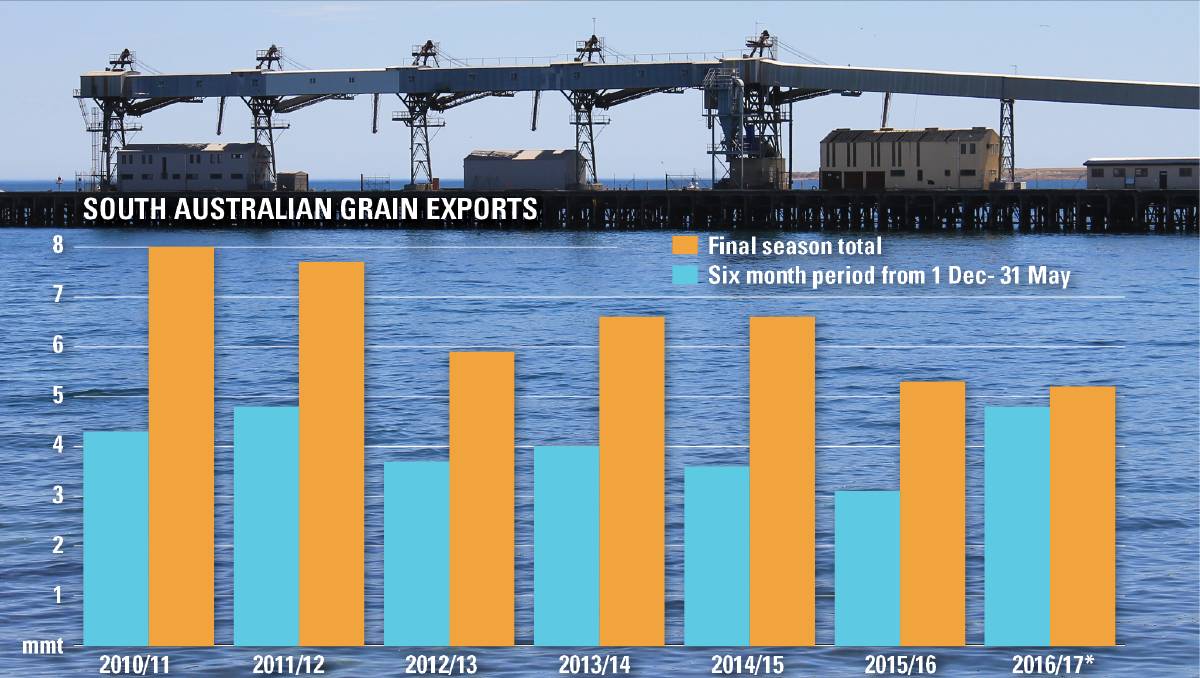 South Australia has been leading the charge in terms of the nation's big export year, with Viterra reporting a record shipping program, with strong bookings still on the shipping stem, with continued strong demand from Asia.

Australian grain exports are tracking at record levels according to ABS data.

Grain from Australia has remained competitive on the global stage throughout the post-harvest export period, meaning exporters remain keen buyers of grain and solid bookings on the shipping stem.

The most recent data from the ABS showed total exports for the seven months to April of 24.06 million tonnes, 13 per cent stronger than the previous record set in the first seven months of 2011/12 of 21.24mt.

It has seen a spike in Australian basis for old crop, with exporters paying a premium of up to $17 a tonne over world futures values according to ProFarmer analyst Angus Thornton.

He said APW wheat in Port Adelaide firmed $18/t in May, whilst Chicago Board of Trade (CBOT) futures values were less than $A1/t firmer over the same period.

South Australia has been leading the charge in terms of grain exports.

Jonathan Wilson, general manager of logistics and commercial relations with Viterra, which handles virtually all grain exports out of SA, said the company had exported its equal highest tonnage of grain to the end of May.

4.8mt of exports were executed out of Viterra’s South Australian ports from December 1 to May 31, on par with the 2011-12 harvest, with strong bookings still on the shipping stem.

Peter McBride, Cargill Australia corporate affairs manager, said the strong demand for grain for exports, in particular in South Australia was the primary driver of the rally in Australian basis.

While many growers have been willing sellers at prices superior to those on offer during the first four months of the year, others are still holding onto remaining stocks.

Peter McMeekin, Nidera Australia origination manager, said there was growing concern about the condition of recently sown crop in key Australian regions due to a lack of rainfall.

“The absence of significant rainfall in the near term will certainly support domestic grain markets,” Mr McMeekin said.

“Some will view this as an old crop selling opportunity, and for others, it will reinforce their resolve to hold.”

However, Nathan Cattle, managing director of Clear Grain Exchange said a lot of old crop was changing hands via his business.

“In the last two weeks Clear Grain Exchange has traded more than 100,000t to push through more than 1mt traded this season representing year on year growth of 90pc,” Mr Cattle said.

He said it was currently a sellers’ market.

“The pendulum of market power is currently in favour of the seller with much more volume sitting behind the bid than the offer currently, which is supportive of price.”

“There is a further 4.4mt of capacity booked on the shipping stem over the June / July period,” he said.

Mr Maxwell said there had been a marked growth in exports to several key destinations.

“Volumes to India, Philippines and China have all more than doubled during the October - March period, versus the same period last year,” he said.