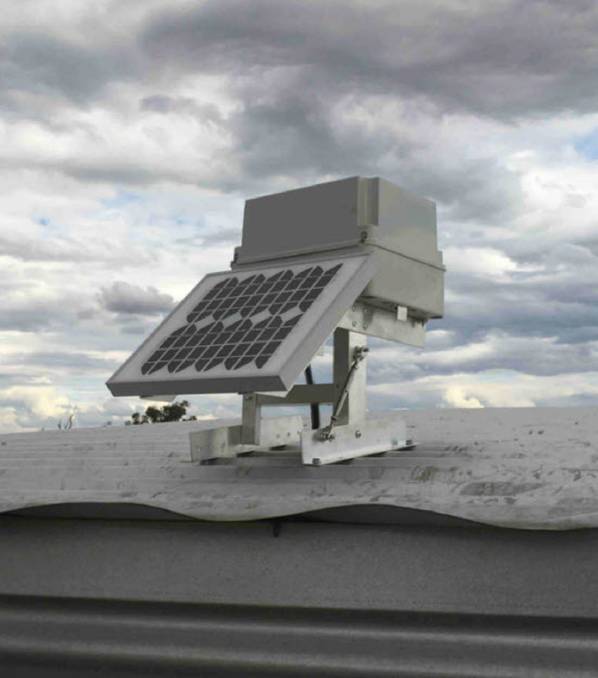 Monitoring made easy: FarmBot sensor modules are light and robust making them easy to mount on a range of tank roof types including plastic, concrete and iron.

It doesn’t require any complex and expensive on-farm equipment, uses satellite technology and can be used anywhere in Australia and New Zealand.

Farms incur significant costs in the manual inspection of water storage for stock and irrigation. These costs include labour, wear and tear on machinery and losses when stock or crops go without water.

The Farmbot water level monitoring service addresses this problem by providing a web dashboard on your PC, tablet or phone with the status of water levels, trends and warnings. It also provides SMS alerts when user defined limits are breached.

Farmbot provides detailed history of water levels which enables better understanding of the performance of the reticulation system and detection of leaks.

North Ceres Agricultural Company general manager James Walker has had a very positive experience using FarmBot which he said is essential to his day-to-day operations.

“The ability to configure and tailor each monitor is a feature that proves FarmBot’s monitor to be far superior to any other system I have trialled,” he said.

“I now have a minimum of six people on any aggregation that are alerted to the fact that we may have an issue with a water system and we have the ability to solve any problem before it has the chance to become a very big problem that will likely take several days to correct.

“The ability to look at and collate water usage and available water at the source is an invaluable tool for managing our operations and the FarmBot system has the ability to show this data on any phone or computer screen.

“I would recommend this system to any person that has livestock that relies on a water source from a tank that can be monitored.

“Any potential issue will inevitably happen at midnight rather than midday and we have had a few breakages on a water system that we have been able to fix the very same day without the risk of an animal health issue the next day.”

Mr Walker said the savings he’s made in animal production and wages as well as the added peace of mind knowing what is actually going on in any water system is invaluable.

Currently Farmbot uses satellite for communication with the monitor and control modules, with 3G/4G and LOra based options currently in development.