A four meter croc has been captured in the Johnstone River just days after a man was attacked in the area. 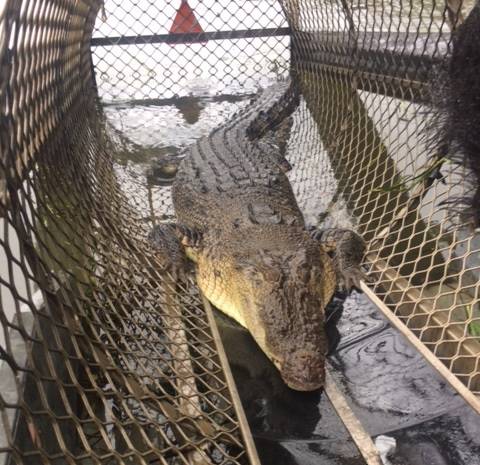 Wildlife officers from the Department of Environment and Heritage Protection (EHP) have removed a 4 metre crocodile from the Johnstone River in Innisfail.

Environment Minister Steven Miles said the crocodile was captured this morning only metres from where a man was grabbed on the arm by a crocodile on the weekend.

“Initial reports indicated the crocodile responsible was only around 3 metres, but after further review EHP wildlife officers confirmed this 4 metre male is the animal they were looking for," Mr Miles said.

“The victim’s bite marks were thoroughly analysed and it became apparent the crocodile was larger than first thought.

“The crocodile was caught and secured by EHP officers, and then moved into a purpose built container. The animal is now being taken to an EHP holding facility where it will be offered to a crocodile farm or zoo.

“I would like to thank our incredible team of wildlife officers who were involved in this successful removal. They perform a very difficult but important role for our community, and do it very well."

Mr Miles said it was important that all crocodile sightings were reported to EHP as soon as possible on 1300 130 372, and that the department investigates all crocodile reports it receives.

“The Queensland Government has an extensive program of public education and community engagement regarding public safety in crocodile country through its CrocWise campaign,” Mr Miles said.

“The new Queensland Crocodile Management Plan and EHP proposals to refresh and improve its CrocWise messaging will be discussed when EHP holds its next CrocWise stakeholders Roundtable in Cairns on 30 March.”

Further information on crocodiles and being Crocwise, including video safety tips on boating and fishing in crocodile country, is available on EHP’s website at www.ehp.qld.gov.au.