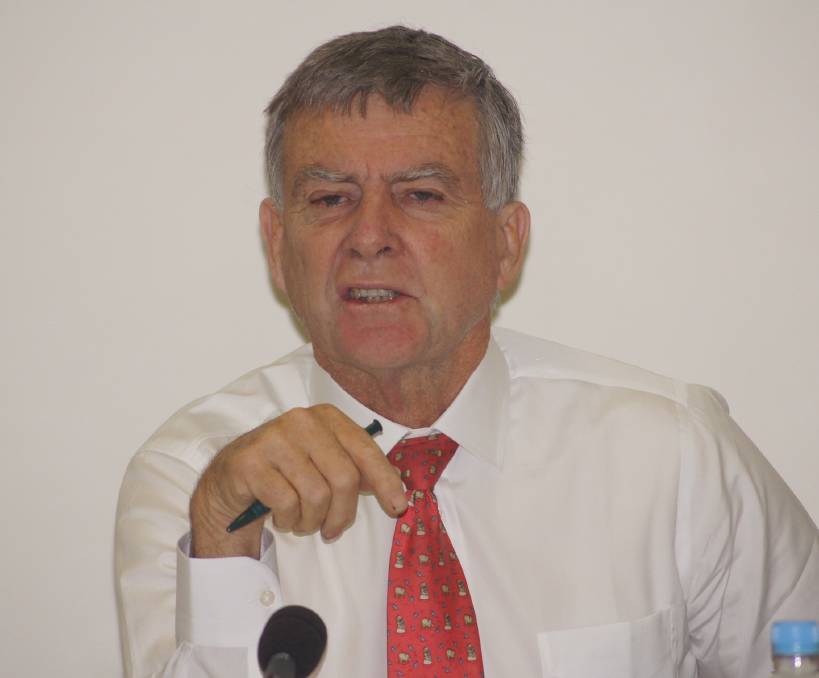 RETIRED NSW Liberal Senator Bill Heffernan’s feisty spirit will haunt Senate estimates hearings in Canberra this week when the Department of Agriculture and Water Resources is grilled about an outbreak of white spot disease that’s cruelling the local prawn industry.

“It was never dull when previous Senator Bill Heffernan was in Senate estimates,” Senator Sterle said of his former co-Chair.

“But Bill’s massive pair of shoes has been filled very ably and very capably by Senator Barry O’Sullivan who has a dead-set commitment to the bush so it will be business as usual.

“We do like to laugh and say the ghost of Senator Heffernan still haunts the hallways of Parliament House.

Senator Sterle said Mr Heffernan would have “loved” to be sitting at the Committee table during this estimates round when the Department was called to explain “how the hell” white spot disease was detected on prawn farms in Queensland recently.

“It will be a very interesting line of questioning and I can only speak for myself but I’ll be in no mood for any BS or cover ups from the Department,” he said.

“We’ll be very keen to follow up on that issue and that’s following on from the inquiries that we’re also structuring in the Senate.”

Senator Sterle referred to an infamous incident in May 2009 when Mr Heffernan raised the “alarm” when he brought a bag of imported marinated, frozen prawns into a Senate estimates hearing, to make his case about white spot on imported prawns.

“They wanted to dismiss Bill as a bit of a comedy act but nobody’s laughing now,” he said.

“Bill made it very clear the prawns were being imported from Asia - I think from Vietnam - and just because they were marinated prawns, it didn’t mean white spot wasn’t on them.

“Bill was hot to trot on this issue and saw it coming years ago but nobody listened at the time so it’ll be interesting to see how they explain it away now.

“And let’s not forget what the drama here is.

“Imagine if white spot got into our wild prawn fisheries for crying out loud and it’s not just for prawns; it’s every crustacean.

“This was an inquiry no one of us wanted to have but unfortunately it’s here now and Bill did try and raise the alarm – he made it very clear.

“He had classic examples of how the white spot disease could get in but it’s here now so we will pursue that line of questioning vigorously during Senate estimates hearings.”

During the 2009 hearings, the then Senator Heffernan said to Department biosecurity officials, “The industry is in serious distress because these fellas are importing these prawns, washing them and using them in the trade as raw prawns”.

“These prawns get around the system and your permit because they are raw prawns.

“What I am suggesting is that the regulations that allow the permit to be issued for these prawns are inadequate because the system of marinating prawns should involve the prawns being impregnated (with marinade).

“What is the point of having this partial system?”

Mr Heffernan said “A lot of restaurants in Sydney are doing this”.

“They get these marinated prawns because they are a lot cheaper than buying Australian raw prawns - they are half the price,” he said.

“They chuck them in a big tub, wash them and then they use them in the restaurant trade.

“Of course the other risk is that they are, and have been, sold as fish bait.”

Mr Heffernan said the “whole thing came about” because he’d been on the Queensland coast and saw some fishermen and asked where they got their fish bait from.

“They pointed to a supermarket and they were imported green prawns,” he said.

“That is how this all started.

“This is just a further extension of that.

“These are green prawns.

“It is like the marinade is some sort of cover for the permit.

“The marinade does not actually marinate the prawn.”

The Inspector‑General of Biosecurity recently formally advised Mr Joyce of her intention to commence a review into biosecurity issues surrounding the recent outbreak of white spot disease on prawns in Queensland.

The review will focus on the circumstances leading to the January 6 2017 suspension of uncooked prawn imports into Australia and the biosecurity considerations relevant to future trade in uncooked prawns.

During the most recent Senate sitting period, a motion was also moved to conduct an inquiry into the white spot disease outbreak, to consider various aspects of the controversy including the emergency response management measures implemented to control the virus in the Logan and Albert river areas of Queensland.

Senator Sterle said he would also have some tough questions at estimates hearings this week about the Australian Pesticides and Veterinary Medicines Authority’s (APVMA) relocation from Canberra, to Armidale in the New England electorate of Agriculture and Water Resources Minister Barnaby Joyce, as part of the Coalition’s decentralisation policy.

“I have lots of questions but we’re still waiting for answers,” he said.

“The business case said it was dumb and I’ve gone as far as saying it’s the dumbest thing the minister could ever come across.

“I’m interested to hear how you could have such a negative business case come out but yet the minister still thinks it’s a good idea to carry on.

“There are still quite a few questions there for the minister to answer and I won’t hold my breath but will certainly try to get some answers.”

Among the groups appearing before this week’s estimates hearings are; Dairy Australia Limited; Australian Wool Innovation Limited; the Australian Fisheries Management Authority; the APVMA; and the Murray-Darling Basin Authority.