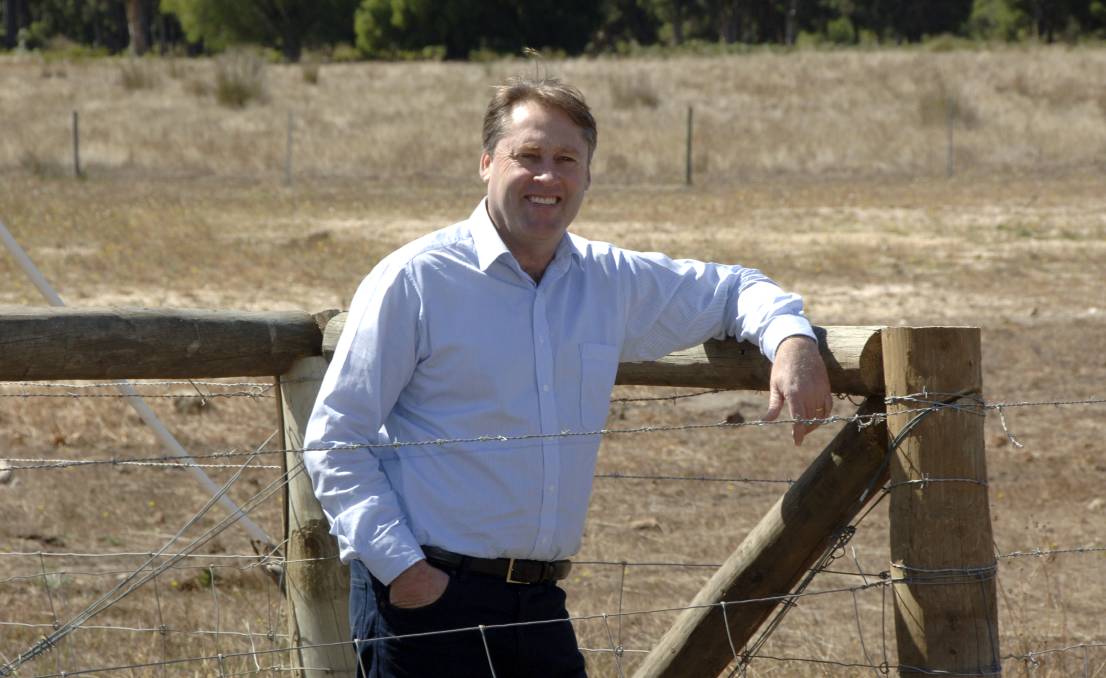 WA O'Connor Liberal MP Rick Wilson on the attack over the backpacker tax.

TENSIONS between the Liberals and Nationals have flared-up in Western Australia on the federal election trail, over the unpopular backpacker tax increase.

Mr Wilson, also a Katanning grain and sheep farmer, said Mr Hassell’s had repeatedly pledged “No Backpacker Tax” but the election sloganeering showed how little his rival understood about economic management, the people of O’Connor and his own political party.

The allegation comes after it was also revealed this week Labor would preference the Liberals ahead of the Nationals in the three-cornered contested rural seats of O’Connor and Durack in WA and the Victorian seat of Murray being vacated by retiring Liberal MP Sharman Stone.

In exchange, Prime Minister Malcolm Turnbull promised the Liberals would preference Labor ahead of the Greens in electorates throughout the country.

Mr Wilson said despite Mr Hassell’s relentless attempts to paint the backpacker tax policy as one that must be abolished, the Pingelly farmer and on-hold CBH director failed to realise most industry figures acknowledged working holiday-makers should pay some form of taxation.

The Liberal MP said Mr Hassell also seemed confused over the Nationals’ backpacker tax position, given federal leader, Deputy Prime Minister and the Agriculture and Water Resources Minister Barnaby Joyce was a member of the federal government’s cabinet which approved the increase.

The increase in taxation measures for working holiday makers was announced in the 2015 federal budget and was due to start on July 1 this year.

The move aimed to raise $540 million for the federal budget by removing the tax free threshold of $18,200 on backpackers and adopting a flat tax rate of 32.5 per cent.

But after pressure from rural backbench MPs and farm and tourism groups lobbying Treasurer Scott Morrison, the increase was deferred to January 1 next year, at a budget cost of $40m, for a review to be conducted across relevant government departments.

Mr Wilson said the work of regional Liberal MPs stopped the 32.5pc tax rate coming into effect on July 1 - as pointed out by Assistant Treasurer Kelly O’Dwyer who announced the review last month.

She said that review would be led by Mr Joyce and “supplemented” by the ministers for immigration, employment, tourism and the Prime Minister’s Department and Treasury.

Mr Wilson said Mr Hassell attended an industry forum in Manjimup late last month but failed to recognise - despite concerns over a 32.5pc tax rate - almost every industry figure at the meeting had supported the introduction of some level of tax for backpackers.

He said Mr Hassell’s misguided attempts to turn the backpacker tax into a political football had only revealed his inability to listen to constituents.

“Very few people in O’Connor are still arguing that backpackers should be able to earn $36,000 over 12 months without paying tax,” he said.

“Mr Hassell says ‘virtually every dollar’ backpackers earn in Australia is spent in Australia and he also seems to think this should absolve them from paying tax.

“Well, Australians spend almost every dollar they earn in Australia and they pay tax, so why should working holiday makers be exempt?”

Mr Wilson said he was committed to ensuring the 32.5pc tax on working holiday makers wasn’t implemented and wouldn’t “shy away” from the need to impose some degree of taxation.

“From the beginning, I’ve advocated for a tax closer to 19 cents in the dollar, which was proposed by the National Farmers Federation,” he said.

“Along with my WA Liberal colleagues Nola Marino, Andrew Hastie and Melissa Price, I managed to have this tax halted at the eleventh hour and the government has since committed to a review.

“We stopped the 32.5pc rate coming in on July 1 and I’m confident that this review will recognise industry concerns and bring the tax rate down significantly.”

Mr Wilson said his Nationals’ rival only wanted to repeat his “No Backpacker Tax” slogan and “ignore the logic of taxing someone who can earn $36,000 per year tax-free”.

“It’s not surprising from a person who once called Royalties for Regions the ‘personal slush fund’ of (former WA Nationals leader) Brendon Grylls,” he said.

Victorian Nationals MP Andrew Broad has also made a strong stand against the 32.5pc tax rate and conceded backpackers should pay some form of taxation, having suggested a maximum 19pc rate, to ensure agricultural workforces are protected.

Mr Broad’s proposal to relive pressures work-force related to the backpacker tax increase also called for a “sensible and measured” approach to the policy, with a 28.5pc tax and backpackers be paid their 9.5pc superannuation guarantee.

But after the Manjimup forum, Mr Hassell said the federal government’s backpacker tax was an “abject failure” that would cost far more money than it would earn, pointing to claims made in a report by YHA Australia.

“The backpacker tax is already costing the Australian economy millions of dollars before a single dollar has even been raised by the tax,” Mr Hassell said.

“The backpacker tax will reduce the availability of seasonal workers to regional WA, damage regional industries and have a negative flow-on effect to the regional economy.

“Working visa numbers are already down and the tax has not even been implemented yet.”

This week, Mr Hassell described the preference deal in the three regional seats that was revealed this week as a “dirty deal” between the Liberals and Labor designed to ensure WA’s two highest-performing electorates “keep on being leeched from”. 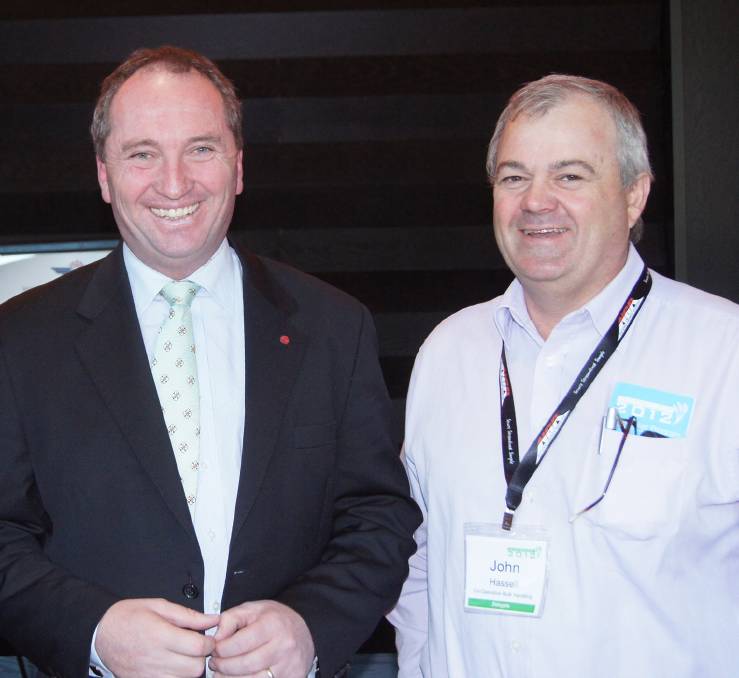 However, former Liberal O’Connor MP Wilson Tuckey won the seat of O’Connor in 1980 on Labor preference flows and then lost it in 2010 to the Nationals Tony Crook after the challenger gained the same advantage.

According to Australian Electoral Commission data, Mr Tuckey polled 38.36pc of the primary vote in 2010 while Mr Crook gained 28.85pc.

But Mr Crook was elected after he received 84.1pc of the Labor preferences from the party’s candidate Ian Bishop and 75.73pc of the Greens’ preference flows.

In contrast, Rick Wilson won the seat following Mr Crook’s resignation with 39.13pc of the primary vote and 34.14pc of Labor preference flows and 18.04pc flowing from the Greens.

Senior WA Liberal MP Mathias Cormann said the preference deal with Labor “are a matter for the Labor party”.

“As far as the Coalition is concerned, we are a strong and united team focussed on implementing our plan for jobs and growth,” he said.

“We are going into this campaign saying to the Australian people that we would like to continue to implement our plan for jobs and growth, a plan which is already starting to show results.

“The Liberal-National party Coalition has been a successful team over the last three years.

“We would like to continue the work that we have done in government and continue to put Australia on the strongest possible economic foundation for the future.”

“Farmers are doing everything they can to attract enough workers while coming to terms with a government response to the outrage generated by this tax which still leaves them without any clarity as to how they’ll find the workforce they need into the future,” he said.

“Depending on what happens on election night, farmers will face either a wide ranging review in a very short time frame, or some kind of unspecified sit down with politicians.

“Whatever comes of this, the only certainty we do have is that it will be too little, too late for this year’s harvest.

“We reiterate our call to all parties to demonstrate that you are listening to rural Australia and that the backpacker tax will be scrapped if you are elected.

Shadow Agriculture Minister Joel Fitzgibbon has been highly critical of the Coalition government for booking the $540m in revenue to be raised from the backpacker tax increase in forward estimates but leading farmers and tourism operators to believe they have delayed its implementation.

“It is clear the government intended to have people believe prior to the election that it would not impose the tax but that it plans to do something different after the election,” he said last week.

Asked about the backpacker tax last week, Tourism Minister Rickard Colbeck said he was pleased the government “put the freeze on it” and decided the increase won’t take effect until at least January 1, next year.

“I’d urge industry to stay engaged with that process,” he said.

“There are some moves out there to have an agricultural only visa class.

“I don’t think we need a new visa class – we have got the visa class and it’s called the Working Holiday Maker visa.

“The issue is the tax rate and that’s what we need to resolve, and so that  will be the focus of the work I do  in this portfolio if I am lucky on the 2nd of July (to be re-elected) because that is effectively what we have got to resolve.”

Senator Colbeck said backpackers were “a very, very important source of top-up labour” for the tourism industry and in some more remote places “a significant source of labour”.

“There is a million people, direct and indirect, employed in the tourism sector across this country, 90pc of those are Australians, but we do need that additional resource so please stay engaged with the process whatever happens,” he said.

Ms O’Dwyer said any outcomes of the backpacker tax review would be considered by cabinet in October or November this year and any changes would commence from January 1, 2017.

Mr Broad and outgoing NSW Senator Bill Heffernan raised concerns the tax increase was announced in the 2015 budget but there was no proper consultation or consideration of its potential impacts in seasonal workers.