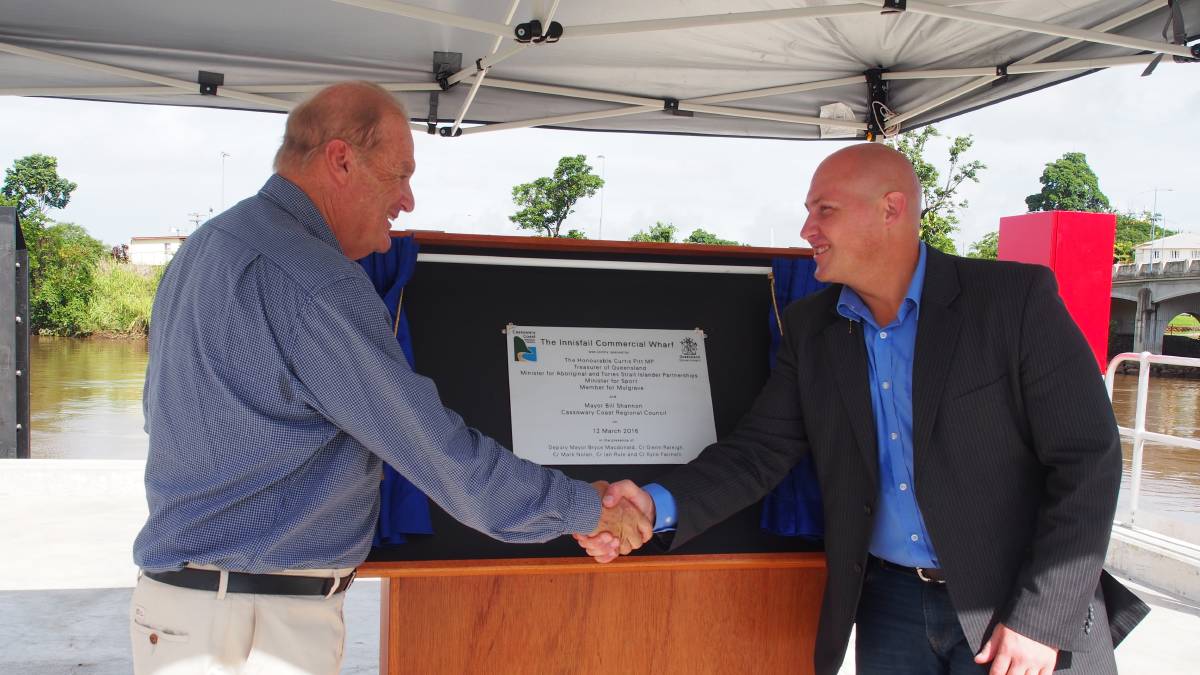 Former Cassowary Coast Mayor Bill Shannon, left, has been appointed to the board of the $5 billion Northern Australia Infrastructure Fund. He is pictured with State Member for Mulgrave Curtis Pitt.

The make-up of the board for the $5 billion Northern Australia Infrastructure Facility has been announced, with a former Far North Queensland mayor a member.

FORMER Cassowary Coast Mayor Bill Shannon has been appointed to the board tasked with making investment decisions for the federal government’s $5 billion northern Australia fund.

Mr Shannon, who served on the Innisfail-based council from 2008 until his retirement from office earlier this year, is a chartered accountant, company director and farmer.

Mr Shannon is also a former director of Advance Cairns and member of the Governance Institute of Australia and has extensive experience working in and advocating for northern Australia.

He is the only board member from North Queensland.

“We have chosen an outstanding board with extensive experience and expertise across a range of sectors and skills,” Mr Frydenberg said.

“They are also knowledgeable and passionate about the opportunities and challenges we face in developing Australia’s north and now, with the $5 billion Northern Australia Infrastructure Facility (NAIF), they have an important opportunity to turn the Government’s vision into a reality.”

Sharon Warburton, Western Australia, will chair the board.

Ms Warburton is a Fellow of Chartered Accountants Australia and New Zealand and has worked at a number of Australia’s largest companies, including Rio Tinto, Citigroup and Brookfield Multiplex.  She was named Western Australia Telstra Business Woman of the Year in 2014 and NAB Women’s Agenda Mentor of the Year in 2015.

The announcement of the board coincides with the passing of legislation to establish NAIF through Federal Parliament.

This enables the facility to start operating from July.

“From July, this facility will provide financing to build the transport, energy, water and communications infrastructure needed in our north. This will create jobs, enhance investment, and unlock the full potential of this vibrant region to grow the northern Australian economy,” Mr Frydenberg said.

This important initiative is a cornerstone of the Northern Australia White Paper, which sets out the Government’s development plan to unlock economic and population growth opportunities across the north.

The facility will be headquartered in Cairns.

The government has also extended the coverage of the $5 billion NAIF to include the wider areas of Exmouth and Carnarvon and the local government shires of Meekatharra and Wiluna, in Western Australia.