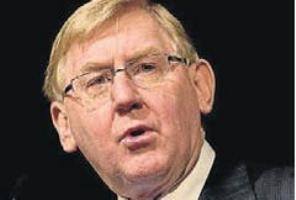 Martin Ferguson says the most important issue is ensuring growth in capacity and maintaining security of energy supply.

THE Federal and Queensland Governments have refused to bail out the CopperString energy project.

THE Federal and Queensland Governments have refused to bail out the CopperString energy project.

The joint venture between CopperString and Leighton Contractors was dealt a potentially fatal blow on Thursday when Swiss mining giant Xstrata signed a 17-year deal with a rival consortium to supply power to its operations near Mount Isa.

Xstrata, the biggest energy user in the region, turned its back on CopperString - which had been promised up to $335 million in conditional funding from the Federal Government and signed with an APA Group-AGL Energy consortium.

The CopperString project was estimated to cost between $1.5 billion and $2.5 billion.

The partners proposed a 1000-kilometre transmission line from Townsville to Mount Isa to support existing and future projects, including renewables.

"We will obviously now take time to consider the implications of the commercial decision announced by Xstrata," Mr Ferguson said.

"The most important issue is ensuring growth in capacity and maintaining security of energy supply at lowest possible cost to consumers."

The Queensland Government, which stands to lose $11.5 million if CopperString does not proceed, has also refused to offer more money to the project.

Federal independent MP Bob Katter, whose brother-in-law John O'Brien is the founder of CopperString, admitted the project was dead.

"I think the State Government should intervene," Mr Katter said.

However, he was confident the project could proceed in some capacity.

"What we're doing is assessing the viability of the project going forward and what opportunities may be there for us," Mr Stockton said.