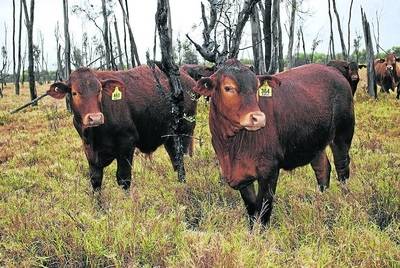 Seven-month-old Belmont-cross steers weaned in May pictured at Berrigurra, Blackwater.

BELMONT Red-cross cattle continue to kick goals in objective feedlot trials and over the hook for the Australian Agricultural College Corporation, with its cattle again featuring in the champions' line-up at this year's Callide Dawson Carcase Competition.

BELMONT Red-cross cattle continue to kick goals in objective feedlot trials and over the hook for the Australian Agricultural College Corporation (AACC), with its cattle again featuring in the champions' line-up at this year's Callide Dawson Carcase Competition.

For the second consecutive year, AACC's Belmont Red-cross cattle placed first in the best liveweight gain for steers after 100 days in the Hutchinson family's Warnoah Feedlot, Theodore, where all cattle in the grainfed section of the competition are fed to ensure a truly objective trial.

The top liveweight gain went to an AACC milk-tooth steer that had an average daily gain of 2.89kg, dressed at 383kg and finished with the maximum points for fat distribution, fat colour and meat colour of eight, seven and 15 respectively.

AACC also placed second in the same class this year, and won reserve champion grainfed steer carcase with a carcase that dressed at 374.4kg, with P8 and rib fat of 12mm and 10mm and EMA of 90sq cm.

The cattle are all bred at AACC's 9713ha Blackwater property, Berrigurra, where students from the Emerald campus are involved in all aspects of the operation.

Livestock production coordinator, Tony Huggers, who is based at Berrigurra, said the college's ongoing success at the Callide Dawson Carcase Competition was a good endorsement of its program and a good boost for the students.

He said about 2200 head are run on the property, including about 800 breeders.

All Belmont Red bulls are used over Belmont-cross females on the property which comprises brigalow, blackbutt and some forest country, managed under a rotational grazing system.

All breeding and backgrounding is carried out at Berrigurra, before steers and some heifers are sent to the feedlot at the Emerald campus for finishing.

Mr Huggers said continuing to select for specific traits in AACC's management of the herd over the years had ensured the cattle continued to be good performers.

"There's the correlation between temperament and tenderness and our selection criteria has a strict focus on temperament.

"We like our cattle to be around 380kg to 400kg when they go to the feedlot, with the steers going for 100 days and what heifers we do send, going for 70 days.

"About 280 a year go through the feedlot, and we try to target the MSA market.

"In the Emerald feedlot, the steers are averaging 2.04kg daily weight gains.

"We keep a percentage of our females as replacement heifers and sell the rest.

"We joined 250 heifers last year and we'll be planning on that again this year.

"The bulls go in in November for a three-month controlled mating period, but we only join the heifers for two months, once they're 14 to 16-months old.

"To select our replacement heifers, we base our decisions on conformation, pelvic area and, of course, temperament."

"The strict mating program over eight weeks nearly does the culling for you in that we preg-test them 10 weeks after the bulls come out and there at no second chances for anything not in-calf."

Mr Huggers said AACC was also selling some of its herd bulls to producers.

In terms of sourcing bulls for the herd, AACC has most recently been buying bulls from Swin and Kathy Hudson's annual Tremere Pastoral African Genetic bull sale at Moura.