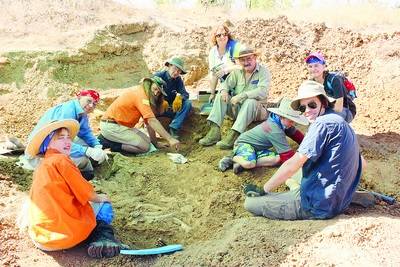 AS a young child Ernie Camp discovered fossils on Floraville Station which at the time was run by his parents.

AS a young child Ernie Camp discovered fossils on Floraville Station which at the time was run by his parents.

Now 35 years on his children are doing the same.

At the weekend a group of more than 10 geologists and palaeontologists visited the station in the hope of uncovering a world first complete Diprotodon skeleton.

Vertebra, ribs, a forearm, a foot, shoulder, jaw and finally a skull were among the bones uncovered at the site, about a 20 minute drive from the Floraville homestead.

More bones remain at the dig site which may produce the world's first and only skeleton of a Diprotodon from one specimen.

Floraville Station owners Ernie and Kylie Camp and their children had spent near on every waking hour at the site since the scientists arrived to excavate the skeleton of the giant wombat or the rhinoceros wombat, which could weigh about three tonnes.

Natasha, 15, and Shannon Camp, 9, in particular, have been fixated by the beast - chipping away with a pocket knife and bushing away sand with paintbrushes in an attempt to expose the bones.

Natasha, who normally attends boarding school, has dreams of one day being a palaeontologist and she's going the right way about it.

Every year since she was a young child she's taken part in fossil digs on her station, making her experience more than some who apply to study palaeontology.

Last year she discovered her own section of fossilised faeces and this year her brother Shannon followed on with the trend naming the site "poopa-da-loopa".

"It's really great to be part of something like this," Natasha said as her younger brother attempted to take a hammer to part of the dig site.

"I just love being in the dirt uncovering bones. Shannon's a little enthusiastic."

The dynamic duo's father Ernie first grew attached to finding fossils when he was a young boy.

At age 11 he met renowned professor Michael Archer when he visited Floraville Station.

"I was finding fossils before the guys came out here and I've been finding them ever since," he said.

"We uncovered a new species when we were kids, later named Elvis the Pelvis, a relative of the Diprotodon. I think once you get caught up in it, you just can't stop."

Prof Archer, who was at Floraville Station during this year's fossil dig, said a young Mr Camp was difficult to keep up with when he showed the scientists all the fossil sites he had found at the station at age 11.

"Thirty-five years ago we first met Ernie and we've been working with him ever since," Prof Archer said.

"It's a very prolific site not just for mega fauna, which are the larger specimens, but also for the smaller specimens.

"We actually named a type of Dunnart that is extinct found out here after the station - the Sminthopsis Floravillenis."

Just how the fossils sites can be uncovered on a 240,000 acre property may remain a mystery to most but to those who know what to look out for the science is a little less complicated.

Many promising deposits are found in creek beds, which are actively sought out, while others are found more by chance.

"I always keep my eyes open for something when I go for a horse ride or I take the kids out for a look after the wet and see if it's uncovered anything," Mr Camp said.

Once a potential site is found the next challenge is to distinguish bone from rock, which is not always the easiest thing to fossil newcomers.

"When you hear a clinking sound against the pocket knife you're digging with you may have a bone," Prof Archer said.

"Bones are more fragile and look more brittle than rock.

"If you look closely it's like a chicken bone. There are little holes through it like marrow."

Preserving the bones is another challenge, especially if they are being uncovered on separate digs, like the Diprotodon skeleton.

Some bone was removed last July and now this year much of the specimen has been added to the collection.

To ensure the bones weren't destroyed by the weather between the two digs, sand and a trampoline was laid between the skeleton and the sun.

Once removed scientists wrapped the bones in plaster cast to preserve them until they can be studied.

Just how much of the Diprotodon will be able to be uncovered as part of the dig is yet to be seen.

Yesterday was the final day of this year's excursion at Floraville Station and today palaeontologists will return to Mount Isa to drop off the fruits of their labour to Outback at Isa for safekeeping before travelling to the World Heritage listed Riversleigh site.

Meanwhile Mr and Mrs Camp said they were thrilled to be part of a fossil project which could uncover a world first.

"It's quite exciting really," Mrs Camp said. "Sometimes it's hard to comprehend that all this history could be here on our property."