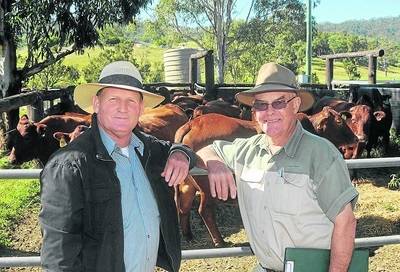 Mr Bristow was in Australia for Beef 2012 as well as the Bonsmara Inspectors Accreditation Training School on May 16-17.

The school attracted a small group of Bonsmara breeders and was held across two days at Yarra Bonsmara Stud, Wirlinga, Beaudesert.

"The Australian cattle originate from embryos imported from a number of different Bonsmara breeders in South Africa," Mr Bristow said.

"They consist of a healthy cross section of available genetics in South Africa. I was also impressed by the improved quality of the Bonsmara-cross calves out of Brahman, Droughtmaster and Brangus cows."

The stud is virtually next door to the Mara Research Station which played an important part in the genesis of the Bonsmara breed.

"In my opinion the Bonsmara meets many of the criteria required of the Australian Beef industry and should soon become a major beef breed in the industry," Mr Bristow said. "With its high percentage of Sanga African genes it is well adapted to hot extensive conditions.

"Fertility in the Bonsmara has always been our main selection pressure and with this constant selection for cows that calve early and have short intercalving periods. We have gained a reputation of having highly fertile productive cows. Bonsmara females in South Africa are highly sought after by the commercial cattle men for their fertility and for good mothering ability.

"In South Africa the Bonsmara dominate in the national carcase competitions and meat tests have been positive regarding marbling and tenderness. Phenotypicaly we look at functional traits and select cattle with short shiny coats, good walking ability, easy calving, good muscling and clean underline with short sheaths/navel."

The Bonsmara Cattle Breeders Society of South Africa is keen for Bonsmara societies around the world to implement a thorough, annual inspection system for all registered cattle.

Host of the training school and manager of Yarra Bonsmara, Tony Berry said the aim of the school was to educate local producers about the Bonsmara inspection systems.

"The Bonsmara is the only beef breed in the world created through a well-documented cross breeding program with the aid of objectively recorded performance data," Mr Berry said.

"Visual evaluations according to norms of functional efficiency were also strictly applied. Through the development and implementation of the Bonsmara System over many years, strict selection for economical factors such as fertility, milk production, growth and adaptability is still applied. Currently there are no accredited Australian Bonsmara Inspectors, we are hoping to change that next year."