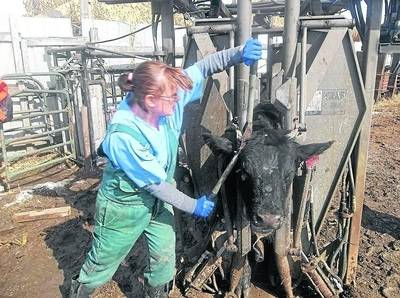 Dehorning is a widespread practice, but more headway is being made in Australia to phase it out.

MORE is being done to water down the furore engulfing livestock welfare, with MLA stepping behind trials to alleviate pain during dehorning.

MORE is being done to water down the furore engulfing livestock welfare, with MLA stepping behind trials to alleviate pain during dehorning.

An experimental anaesthetic spray is being trialled on North Queensland properties including McDonald Holdings, which consists of 11 stations.

The company is reportedly working with the University of NSW and the RSPCA to test the Tri-Solfen spray, which clots the dehorn cut.

Dehorning remains a widespread practice but welfare and research organisations are working towards dismantling existing genetic pools and 'breeding in' polled animals.

In the meantime, MLA said there needed to be a shorter term solution.

"The breeding of polled or hornless animals will no doubt be the long-term solution, but in the short to medium term, it is essential that the industry works to identify practical and cost-effective options to prevent or alleviate the pain associated with dehorning," a spokesperson told the North Queensland Register.

"The anaesthetic spray being trialled on North Queensland properties is an exciting option and we look forward to seeing the results from the trial."

The practice has attracted debate, particularly when performed on older animals and amid the inflamed animal welfare focus over recent months.

"MLA is aware that dehorning, especially when it needs to be carried out on older animals as may occur in extensive pastoral regions of northern Australia, is a welfare con- cern for both our producers and the community," the MLA spokesperson said.

In recent years, MLA has coupled with Beef CRC (Cooperative Research Centre) for Beef Genetic Technologies to build and develop a new alternative. They operate on a polled cattle focus and last year released the Australian Poll Gene Marker test to identify polled progeny and horned genes in breeding animals.

The test was developed in tropically adapted breeds with an average of 89 percent of tests in polled Brahmans returning an informative result.

There was also potential to use the test on British and European breeds.

Beef CRC said the tool gave producers a powerful ability in making selection decisions and a cost-effective and efficient long-term practice. It was developed in partnership with CSIRO, MLA, and the University of Queensland Animal Genetics Laboratory.

The tour included talks with John Henshall and Emily Piper about breeding for polled as an alternative to dehorning.

On-farm trial work with the anaesthetic is expected to continue in North Queensland late this month.