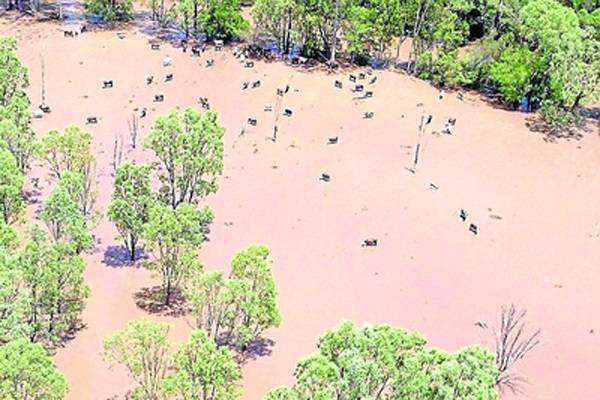 More than 500 cattle from the Wilson family's property "Wowan" near Calliope were swept away in flood waters.

CALLIUNGAL Station, Wowan, owner and operator William Wilson is unsure of the exact number of cattle he has lost during ex-cyclone Oswald but is expecting it could be in the thousands.

CALLIUNGAL Station, Wowan, owner and operator William Wilson is unsure of the exact number of cattle he has lost during ex-cyclone Oswald but is expecting it could be in the thousands.

"Our entire property at Wowan is underwater and the fences are gone so all we can do now is wait," Mr Wilson said.

"We did a fodder drop by helicopter on Thursday but unfortunately it was not as efficient as I expected it to be.

"Our cattle are spread over 8,000ha so all we can gauge is how many head we have left and many have come back but it could take up to three months before we know the full extent of the damage to our herd. The winds were so strong they pushed a mob of 4000 Hereford/Brahman-cross cattle towards the river.

"The wind was blowing from the east and so of course they moved towards the west, closer to the water, and the river came up in the night and they just got swept away down the Don River.

"We had 32 inches of rain over the four days. Our records date back to 1906 and this has been the wettest January on record without a doubt.

Mr Wilson has been using social networking site Facebook in order to track down his missing cattle and says he's already had a number of responses.

"I set up the 'Locate Lost Cattle Brands by Location' page to reach a wider audience and help people get their stock home."