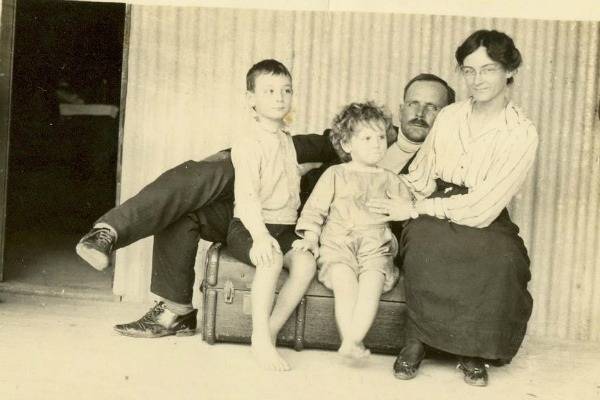 THE PAGES of the aged account book should be worth nothing. Yet, they are invaluable, for on them lies the life of a North Queensland grazier.

THE PAGES of the account book, aged and moth-bitten at the edges, should be worth nothing. Yet, they are invaluable, for on them lies the life of a North Queensland grazier chronicled in cattle figures, account balances, and most importantly, correspondence.

Situated at Wetherby Station, Richmond, Harry was a regular contributor to the Pastoral Review, which he described as “an influential cattle journal with an international circulation.”

Letters from 1932 were glued alongside Harry’s account figures for the year and characterise Harry as an innovative man, keen to improve the genetic traits of north Queensland’s herd 80 years ago. Topics included the benefits of inoculating cattle for red water (tick fever), and whether spaying gates were preferential to ropes or just “nice as furniture to set the yard off”.

However, most prevalent, were conversations between Harry and Aberdeen-Angus (AA) cattle breeders from Scotland, New Zealand and northern Queensland regarding the merits of cross-breeding AA cattle with the more popular breeds, Shorthorns and Herefords.

Correspondence on the matter begins January 26 that year, with a letter from a Mr F. Armstrong, Akitio Station, New Zealand to Harry illustrating the traits of a first cross and the place of AA cattle in his country.

Mr Armstrong wrote, “The first cross with an AA bull on a Hereford cow, invariably, is a polled black with a white face. The Angus and Hereford strains are the hardest to eradicate, but with each cross of the Angus, the white face, after four crosses, disappears.

“The cross with the shorthorn cow is a good cross, but for choice, the cross with the Hereford is preferred. Black body, white faces, and almost invariably without horns – it has taken AA nearly 50 years to reach this present position in NZ.

“They now reign supreme. In NZ, the Shorthorn has almost entirely disappeared as an ordinary station beast, being unable to stand up the hardship of making a living on the poorer country while AA and Hereford are forced to make the pasture suitable for sheep.

“The fact that noted Shorthorn stud breeders of a decade ago are now AA breeders is, I think, sufficient proof of the worth of the breed.”

In a letter dated May 6, 1932, Mr Armstrong wrote again to Harry affirming the breed’s prominence in NZ and the country’s ability to meet an Australian demand for AA.

“You will therefore see that should a keen demand arise in Australia, I think we could meet it.”

It was the polled qualities of AA crossbreeds Harry was most interested in. He wrote in reply to Mr Armstrong, “It seems to me, that if for no other reason, the AA should appeal to cattlemen by reason of his hornlessness.

“Think of the enormous accumulated losses suffered by cattlemen due to horns, especially when fats are jammed into trucks and railed for hundreds of miles,” Harry wrote.

It was his belief the AA breed seemed “likely to oust the Shorthorn from premier place in the great cattle breeding countries of the world.”

Harry wrote again to Mr Armstrong later in the year to discuss properly recognising the AA breed in Australia through the Aberdeen-Angus Society of Scotland regularly advertising in the Pastoral Review.

He wrote this would “get the Australian cattlemen thinking” as “we in this country…don’t cater properly for the trade, expecting it to come to us.”

“With merino sheep, we have done well enough, but our cattle business – never much good – has gone to pieces of late years, through apathy and neglect, and bad business and cultural methods generally,” Harry wrote.

The AA Society of Scotland’s secretary James A Barclay, replied to one of Harry’s letters on March 29, 1932, and wrote that although he spoke from little experience of cattle conditions in Queensland, he believed the introduction of AA sires into herds would “simply revolutionise cattle breeding in that country and would give results which I am sure would go to enhance the reputation of Australian beef on the British market.”

Mr Barclay also wrote that annually in their herd book, “we now register over 6,600 entries, these being drawn from Scotland, England, and Ireland, and I may add there are now more AA bulls sold in this country for crossing purposes than of any other beef breed.”

The Society’s secretary commented on the AA-Devon cross, a breed “crossed fairly extensively” in the south of England.

“I do not think that any cross produces a finer carcase of beef,” Mr Barclay wrote.

“We had some specimens of these at the Aberdeen Fat Stock Show last December sent up by the Prince of Wales from his farm in Cornwall, and although the cross is a rare one in Scotland, it was greatly admired.”

While there was a lot of international correspondence regarding the merits of AA cross-breeds, Harry also wrote to John Chisholm, from Wantalanya Stud, Winton, which according to Mr Chisholm’s letterhead dabbled in “AA bulls, Clydesdale horses, and blue cattle dogs.”

On February 23, 1932, Mr Chisholm wrote a letter to Harry as the only registered AA stud owner in central and north Queensland.

His stud comprised of 80 cows and heifers, the latest four arrivals of which “cost me well over the three figures”, and four bulls – Tattoo, Wallhallow Prince of Noth, True Mark of Wantalanya, and El Security of Abington.

“In addition to stud, I have 50 odd purebred cows, which are mated with stud bulls and from which I breed my herd bulls,” Mr Chisholm wrote.

“I have always got 25 guineas for stud bulls and 12 guineas for herd bulls, delivered on trucks Winton, at about 12-18 months old. Any outstanding stud bull price up as high as 60 guineas, though of late prices have gone to hell.

“However, I have this year reduced the price on stud bulls to 20 guineas. All bulls are inoculated twice for red water. At present, I have only nine stud bulls on hand, which are for sale at 20 guineas. Their condition is only fair and they were calved September-October 1930. It is terribly dry here as I have had absolutely no rain since last March.”

Mr Chisholm said he had found the cross-breed to be “exceptionally hardy, easily handled, and very early maturing” with 18 steers aged no more than 2 years 9 months sent to Winton Butcher averaging 702 lbs.

Harry’s account book ended with clippings from the Pastoral Review with photos of winning AA crossbred cattle. There is no doubt Mr Anning was an enterprising man, although one who was yet to discover Brahman cattle.

SPECIAL THANKS to Bronwyn McBurnie and her team at JCU’s Special Collections for providing access to the relevant account book.