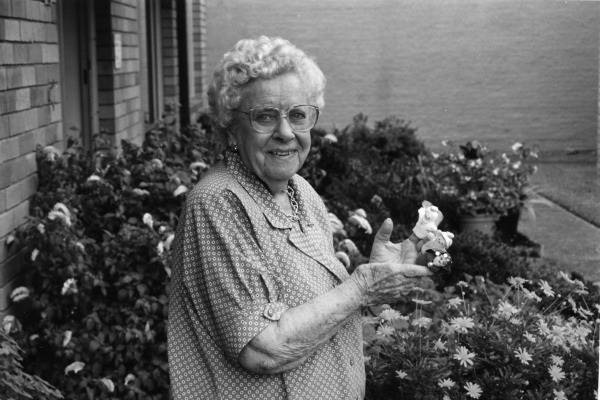 Margaret Somerville in Sydney in recent years - wearing some of the finger puppets she made for charities. Margaret was one of three women who in 1942 helped take 95 children from their improvised home on war threatened Croker Island, across the continent to safety at Otford, near Sydney.

IT WAS back in September 1941 that 29-year-old Margaret Somerville called in at the Sydney offices of the Methodist Overseas Mission.

IT WAS back in September 1941 that 29-year-old Margaret Somerville called in at the Sydney offices of the Methodist Overseas Mission.

She came from a Methodist family, and she felt that she

should “do something with her life for God”.

But, in the best Methodist way, Margaret wanted to do something practical for other people – something that would make earthly lives better.

She had read an article about the proposed new Methodist home for children that was being established on Croker Island, and pointed out that there was an urgent need for sewing machines on the island.

She explained that she had brought her own sewing machine to donate.

She was then told that Croker Island also needed someone to teach sewing and cooking to the older girls.

Within a few weeks she was on her way to Arnhem

Land, to be a cottage mother in one of the children’s homes that were being set up on the island.

Margaret was a young woman, full of energy, enthusiasm and commitment to her life’s purpose – to help others. When she died in NSW on July 30, 2014, Margaret

was 101 years old, and still full of purpose and commitment – full of love, in the best sense of that word.

Margaret arrived in Darwin on November 9, 1941. After a few days, she sailed to Goulburn Island, where part-

Aboriginal (as they were then described) children were being cared for, pending their transfer to permanent homes on Croker Island. The children had been,

not long before, inmates of government institutions in the Territory.

A change in government policy saw these institutions closed and the children given into the care of various missions.

It had all been done in great haste, and none of the missions were ready for the sudden influx of children. Croker Island had been chosen as the new home for the children allocated to the Methodists, but in December 1941 the facilities there were woefully incomplete.

Nevertheless, on November 25, 1941, Margaret and 44 children were moved from Goulburn Island to Croker, aboard the mission lugger Larrpan.

By Christmas 1941, there were 95 children on Croker Island.

The staff on the island consisted of Margaret, Olive Peake and Jess March as cottage mothers, as well as seven other missionaries and their wives and children.

Detached kitchens and bathrooms and concrete floors had been planned, but there had been no time to complete these items before the children arrived.

The cottage homes were part of a radical new plan by the Methodist Mission to de-institutionalise the care of the children, and instead to create for them a

living situation that would be as close to a normal home as possible.

The plan worked well. Children who had been wild, undisciplined and unhappy while in government institutions very soon and very decidedly changed for the better.

For almost all of the children, Croker Island was their home and it was a happy one.

Croker Island was a place of love, but the wider world at the time was full of violent menace.

The war in the Pacific had broken out in early December 1941, and Japan immediately began a terrifying advance towards north Australia.

On February 19, 1942, Darwin suffered the first of a series of terrible air raids.

Almost all civilian women and children were evacuated from the Top End, along with most white men.

A message was sent to the women on Croker Island saying that arrangements could be made for their removal to safety.

Weeks passed before arrangements were made to evacuate everyone from Croker Island.

Finally, on April 7, 1942, a total of 103 people left the island to begin a remarkable exodus to safety for

the duration of the war.

The 95 children in the party ranged from babies to teenagers.

For seven weeks, the Croker Island evacuees travelled by canoe, lugger, on foot, by broken down trucks, train and by military convoys until at last they reached their destination – Methodist homes at Otford, on the outskirts of Sydney.

Margaret’s task was to feed everyone along the way. She did it with materials that ranged from bush tucker to horse meat, often cooked on open fires in improvised utensils.

Margaret reflected later, “The children took the trip to Sydney in their stride. For them, it was one big adventure. You could never have done it with a group of white children, but our children just fitted in to whatever had to happen.

“They were used to deprivation and discomfort; they didn’t complain; they were always bright and cheerful.”

The children were at Otford for four years. They went to local schools, on excursions and even for rides in lifts in

“They went ahead in leaps and bounds,” Margaret said. Then, in August 1945, some of the children rushed home from school, shouting, “The war is over! Can we go

back to Croker tomorrow?”

It wasn’t so easy. It took months to arrange transport and to deal with public agitation that the children should remain in Sydney, where it was said they would have better chances in life.

The children themselves were unanimous that they should go back to the island as soon as possible, and eventually the minister for the interior ruled in their favour.

Finally, on April 4, 1946, the children boarded the cargo ship Reynella for a voyage back from Sydney to Darwin.

Margaret Somerville was the only one of the original mission staff to return with the children.

Much work had been done on the island to prepare for the return, but conditions were still very basic and remained so until well into the 1950s, when more

government funding began to flow through.

Then, Somerville Homes were established in Darwin to provide a transitional cottage arrangement for children who were moving on.

Vicki O’Halloran, CEO at Somerville Community Services, said that “knowing our organisation is born out of a history that pays tribute to the strength of a great woman with such courage is so fitting. To know Margaret was a privilege, to be her friend an honour.

“Our work at Somerville has been greatly inspired by her integrity, humility and commitment to improving the

Margaret left Croker Island in 1965 when she returned to Sydney to care for her ageing parents. Through the half century since then, she kept in regular contact with almost all of the children who had been in her care.

of Margaret’s book, They Crossed a Continent.

The mutual love and regard that they had for each other was conspicuous.

Louise Neave (nee Goodall) put it beautifully when she wrote to the Northern Territory News: “Those early missionaries did everything in their power to make us as happy as they could. They were young women who loved us as their own children. They stuck to us through thick and thin. When the war broke out, they didn’t abandon us. I thank them,

Now, Margaret Somerville, the last survivor of those missionaries, has gone from our midst. She leaves us with the example of her life, an example of dedicated

We thank her, with love.

A memorial service for Margaret will be held at the Palmerston Uniting Church at 3 Bonson Terrace in Palmerston on Tuesday, August 19, beginning at 6pm,

followed by a celebration of Margaret’s life, from 7.15pm, at Somerville Community Services offices, Victoria Drive, Palmerston, until about 8.30pm