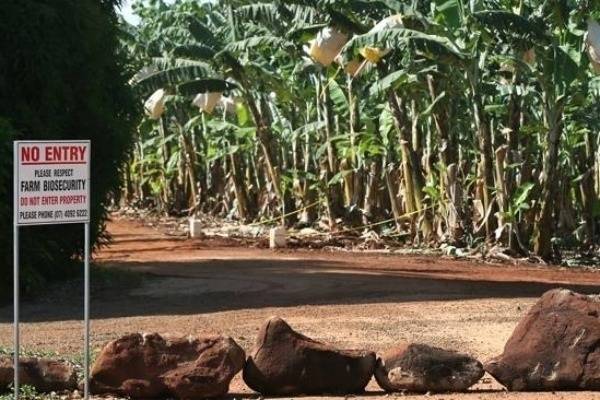 A five week quarantine has been lifted on a farm near Mareeba after it was declared free of Panama disease tropical race 4.

BIOSECURITY Queensland has finalised testing of samples from a quarantined banana farm near Mareeba and the final result is negative for Panama disease tropical race 4.

BIOSECURITY Queensland has finalised testing of samples from a quarantined banana farm near Mareeba and the final result is negative for Panama disease tropical race 4 (TR4).

“The initial positive result we received from this property last month, using a PCR test, has proven to be a ‘false positive’,” Mr Letts said.

“The particular diagnostic test used is an internationally-recognised molecular PCR test that was first published in 2010,” he said.

"Since the initial positive result in early April, we have been conducting further surveillance and testing samples from the property. This has been a complex process, but the final definitive vegetative compatibility group (VCG) test result is negative for tropical race 4.

“Extensive investigative work by the diagnostic team involved in the testing indicates that the particular PCR test used isn’t reliable. To our knowledge this is the first time there has been evidence of a problem with this diagnostic test anywhere in the world.

"As a result, Deloittes has been engaged to conduct an independent procedural review of all Panama disease diagnostic systems and processes used by Biosecurity Queensland and the University of Queensland. That work has commenced and is expected to be completed next month.

"When dealing with exotic diseases Biosecurity Queensland must always take a precautionary approach. If we believe a serious risk exists, as we did in this case based on the initial positive result, we will quarantine properties to control the risk of spread.

“It is better to have to revoke a quarantine than to hesitate at the outset and potentially place an entire industry at risk.

“The Queensland Government has made a commitment to reimburse the net revenue forgone for the period in which each of the quarantined properties was unable to trade.”

“We still have a confirmed case of Panama disease tropical race 4 at Tully and growers should continue strengthening their on-farm biosecurity practices to protect their businesses.

“We don’t yet know if Tully is the index case, and there may still be other infected properties yet to be identified. Panama disease tropical race 4 can live in the soil for decades and it can be a number of years before symptoms become apparent in plants.”

Mr Letts said the Mareeba farm was the second property to be quarantined after the first property at Tully was quarantined in March.

"There is absolutely no doubt about the Tully farm diagnosis after the original PCR positive results were confirmed by the VCG test.

“To date, 12 diagnostic tests including visual, molecular and biological testing, conducted on a range of samples from the Tully property have all been positive.

"However, for the Mareeba property the outcome is different. When a culture was unable to be grown from the original sample, we took more plant samples from the property. A range of testing could not confirm the original positive diagnosis.

"Industry and the property owner have been informed of this. We continue to work together to resolve this issue and support all growers in protecting their businesses from this disease.

“In the meantime our testing program continues. There are a range of tests than we can use for Panama disease tropical race 4 and we are not reliant on this one PCR test."

If you suspect Panama disease on your plants, report it immediately to Biosecurity Queensland on 13 25 23, or call the Exotic Plant Pest Hotline on 1800 084 881.