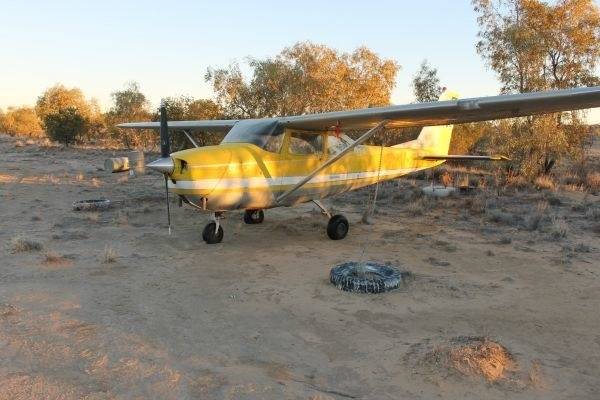 SOUTH West Queensland bush legend ‘Bomber Johnson’s’ Cessna 172 will make its final flight from Nappa Merrie Station in the states Channel Country, to Longreach and its new home at the Australian Stockman’s Hall of Fame.

SOUTH West Queensland bush legend ‘Bomber Johnson’s’ Cessna 172 will make its final flight from Nappa Merrie Station in the states Channel Country, to Longreach and its new home at the Australian Stockman’s Hall of Fame.

The aircraft is due to arrive at the Longreach Airport on Saturday August 1 at noon for an official handover from Bombers niece, Faye Corrish, to the Australian Stockman’s Hall of Fame.

The Australian Stockman’s Hall of Fame & Outback Heritage Centre is looking forward to the arrival of such an iconic aircraft of the bush.

CEO of the Australian Stockman’s Hall of Fame Lloyd Mills said Bomber Johnson is the exact reason the facility is in existence. "Representing the development of Outback Australia through people such as Bomber is such an important asset to maintain for all Australians. Bombers Cessna will be the first asset to go on display as part of the recognition that aerial mustering has and continues to play in the Bush," Mr Mills said.

Alfred ‘Bomber’ Johnson was born and raised in Queensland Channel Country, where he worked in the rural industry his entire life. One of the Outback’s true bush gentlemen and a

colourful bush character, most residents or regular visitors to the region would know him.

Bomber is remembered for his heroic efforts in the big floods of 1974 which left many channel country stations and small towns isolated for months. Bomber voluntarily flew medical supplies, mail and rations in to people stranded by floods, and flew people out to places where they could access RFDS aircraft or doctors in which he was awarded a British Empire Medal. Australia at this point had not yet established its own award system and the BEM was one of the most prominent awards available for civilians at that time.

True to the extreme modesty we all knew of the man, Bomber never used the letters BEM after his name, to which he was entitled.

In following years, Bomber worked for renowned cattle companies S Kidman & Co and later with Stanbroke at Nappa Merrie Station, where Bombers Aircraft has been since his passing.

When not flying Bomber took on the task of ‘caretaker’ of the Burke & Wills Dig Tree. His care of the Dig Tree spanned 12 years and only his ill-health took him away from this responsibility. In 2011 he was awarded the Queensland Tourism Vince Evert Award for outstanding contribution to outback tourism. The Royal Queensland Historical Society made the award of a MacGregor Medal to Bomber in recognition of his services promoting Queensland history. These awards, along with his earlier British Empire Medal, are substantial recognitions of Bomber’s contributions to his outback community.

Greg Campbell from S. Kidman & Co said it is only fitting that a man who spent his whole life in the remotest parts of the channel country, aerial mustering and later, tourism at the

Dig Tree, is memorialised at the Australian Stockman’s Hall of Fame where we can all honour this humble man, his life of services to others and the wonderful contribution he made to

The aircraft will be piloted by Randal Crowley, a part time mustering pilot for S. Kidman & Co. Aside from being an excellent pilot, Randal is also a former aircraft mechanic. Last year when S. Kidman & Co CEO Greg Campbell requested Randal to take the wings off Bomber’s plane so it could truck it to Longreach, his response was “the best way to shift that old plane

So after a detailed mechanical check and some minor issues attended to, its fingers all crossed for an uneventful last flight into Longreach. Because the VHF radio in Bomber’s old plane (VH-PLZ) isn’t working properly, another S. Kidman & Co plane will shadow it on the flight from Innamincka to Longreach. The Kidman pilot nominated to shadow Randal is Chris Taylor. Chris is the current national sport aircraft aerobatics champion and is a proficient builder of plastic composite aircraft. Aerial mustering is a bit of light relief for him.